Originally posted on December 28, 2015 by CBC News: The Early Edition.

When it opened in 1995, it was North America’s first free-standing children’s hospice.

For Canuck Place Children’s Hospice, 2015 is a special anniversary: it marks 20 years of providing care for B.C. children.

In 2015, the pediatric care program helped more than 600 children and their families as they dealt with the coming death of a child.

Demand for their services has grown and is still on the rise: in the last 10 years the total number of new patients has more than doubled.

One mother whose child has been touched by Canuck Place is Alysone Martel. Her son Griffin, now aged 11, has received inpatient care at Canuck Place since he was only a year old.

Griffin has special needs as a result of severe seizures he suffered at 18 months of age, and now needs constant medical attention.

Martel also has an older daughter, and when Griffin suffered his seizures, the family was separated for more than 10 weeks. Canuck Place allowed them to be a family again, she said.

“It was life-changing, because we were there as a family, Griffin was receiving all the wonderful care that he needed, and we were supported,” Martel told The Early Edition guest host Stephen Quinn.

“We were provided with a place to sleep, great meals, comfort, activities that kept my daughter busy, the volunteers, by spending time with our daughter gave us a break, my husband and I could be together … it’s just a wonderful environment.”

Martel says one of her favourite memories so far of Canuck Place is how they took her son to Cultus Lake for an afternoon playing on the waterslides.

Griffin uses a wheelchair, so Canuck Place organized local firefighters to carry him and other kids up to the tops of the rides so they could have their turn. 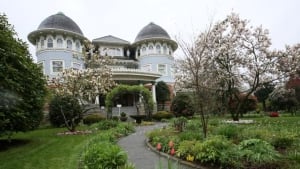 The original Canuck Place hospice facility, located in the Arbutus area. A second facility is now open in Abbotsford. (canuckplace.org)

“It was quite an incredible experience. One of the other boys, as soon as he came down, started signing, ‘More, more!'” said Martel.

“There are those special, once-in-a-lifetime kind of things that you don’t experience without an organization like Canuck Place.”

Martel also said that by getting together families experiencing troubles, Canuck Place has helped her family build bonds with others going through hard times.

“Without Canuck Place, I think we would have been fumbling around in the dark, and perhaps we wouldn’t have developed the positive outlook that we have with our son.”

To hear the full story, click the audio labelled: On 20-year anniversary, one mom talks about impact of Canuck Place