Emmanuel’s speech, in full below:

A little over three years ago, on the morning of August 16, 2016, Kristian, the youngest of our 3 sons passed away in his sleep. We were at Canuck Place.  It was the day of our 30th wedding anniversary. It was a beautiful, sunny day, and we had planned to pick up some of Kristian’s favourite foods and have a picnic in the gardens to celebrate the day. Family and friends were already texting me that morning wishing Teresa and I, a happy anniversary. But all I could say in my eventual reply was that our baby went to heaven. He wasn’t supposed to die. But he did that day.

Kristian was 20 years old when he passed away. He was barely 18 when we found out he had cancer.  We got the news the day after his high school graduation. Before our lives were forever changed that day, Kristian lived a life full of hope and promise.

The 3 brothers were close. They had a competitive spirit, but at the same time, they looked after each other.  They always had each other’s backs.  Kristian being the youngest, always strove to be better than his brothers.  In sports and in his studies. He excelled as a student athlete at Vancouver College.

In his grade 10 year, he suffered a devastating knee injury. It threatened not only his ability to continue playing the sports that he loved, but the doctors were worried about his ability to walk. The operation to reconstruct his right knee took two hours and 13 screws. He struggled with the thought of not being able to play competitive sports, especially football. But Kristian never lost hope. He always had this “never give up” spirit.  That same spirit helped him once again when he graduated from high school. As soon as the cast came off, he worked hard to get his strength back.  He persevered and 9 months after his operation, he was back in pads and training for varsity football.

His hard work and tenacity earned him a football award from Vancouver College recognizing him for his strength, dedication and faith. The same characteristics recognized by the university coaches who scouted him.  He eventually received 3 football scholarship offers.

Kristian loved animals and dreamed of being a vet since he was 8 years old. With that in mind, he decided to accept the scholarship offered by the University of Saskatchewan where he would study animal sciences and play for the Huskies football team. The Huskies coach even gave him the jersey number he wanted – #11.

Mitchell was a close friend of Kristian. He was a sweet, handsome boy who collapsed in the playground at Vancouver College one day due to a heart condition. He never recovered. He passed away at Canuck Place in 2008.  He was 11 years old.  Mitchell’s favourite number was #11.

Mitchell’s death affected Kristian deeply. It affected our entire family deeply. Mitchell inspired Kristian to be a better person. A stronger person. He learned to embrace life and rise to the challenges he faced just as Mitchy did in his short life.

Kristian took it upon himself to carry a torch for Mitchell.  #11 would also be his number. It would be a reminder to him and others to live life to the fullest, to face adversity head on, to never give up, to never lose hope.

When Kristian graduated from high school in June of 2014, he also received the Mitchell Ho Memorial Award.  A fitting tribute to their short time together at Vancouver College.

Also, earlier that year, he met the girl of his dreams, Bailey. Together, they imagined not only their lives during university, but their lives after university. They were in love and Kristian was on top of the world. What could possibly go wrong?

When his world collapsed the day after graduation, Kristian felt lost, as our whole family did. How could this happen? Why him?  Questions we will never get answers to. Kristian had just turned 18, and just based on that societal marker, he was an adult. But on that day, and many times in the weeks and months to come, he would just be our baby boy. A child that needed reassurances from mom and dad, reassurances that everything would be ok.

Kristian had to give up his football scholarship, but not his dream of being a vet. He was able to go to UBC to continue his studies, but slowly realized and accepted that he would likely not play football again.

His 1st round of chemo and radiation treatments was aggressive and hard on Kristian. But in the end, it was successful, and Kristian would allow himself to dream once again. Of his future with Bailey.  Of his future as a vet. He would get back into shape and start playing sports again.

But 6 months after the good news, Kristian’s world collapsed once again. The cancer returned and this time it was even more aggressive. Kristian was devastated. He struggled with the 2nd round of treatments, more so than the 1st. He struggled with school, but managed to pass all his courses.

By Christmas of 2015, he was exhausted. He welcomed the Christmas break as a time to recover. It helped that it was also the time of year he loved the most. He would complete his treatments in early 2016 and slowly regain his strength.

While waiting for the results of his treatments, we did the Sun run in April as a family and planned a trip to Hawaii for his 20th birthday in May. We met with the doctors at the end April and the news was not what we wanted to hear. The treatments were not successful. The cancer was spreading and the next step was not clear.  But Kristian was not ready to give up. The doctors needed time to evaluate the options so we decided to have our family vacation in Maui. It would be our last vacation together.

We had a great time in Maui and came back recharged and hopeful. Our limited options led Kristian to be part of a clinical trial at Children’s Hospital. But Kristian’s condition started to deteriorate quickly and the clinical trial was no longer an option. It was at that time we were introduced to Canuck Place.

But Canuck Place was persistent, but in the kindest, most gentle way possible. They took their time with us.  They listened to us. They understood our fear, and understood our hope. They understood and respected Kristian’s will to live. When we wouldn’t go to them, they came to us. They offered us help to manage Kristian’s pain. They gave us the tools to help him sleep, to make him more comfortable. When his breathing became harder, they arranged for the supply of oxygen in our home. They were there when we had to take kristian to emergency at Children’s Hospital, and they were there when we took him back home. They checked in with us every day to help us with anything we needed, and sometimes just to talk.

Kristian continued to take chemo pills, but his condition became worse. They convinced Kristian to go to Canuck Place to help him sleep.  They gave us a room that allowed us to be together as a family including Bailey. They took care of his medical needs and helped us take care of him. They even rigged a bath for him and it took 3 nurses to bathe him. I remember Kristian telling me how good he felt after that bath.

But Kristian still didn’t want to be there. He wanted to go home.  So after a few days and a decent amount of sleep, Canuck Place agreed for us to take Kristian home, but kept the room for us in case he changed his mind.  Kristian struggled that night at home to be comfortable and did not fall asleep until the following morning. By mid-afternoon, the doctors from Canuck Place were at our house, worried about his condition. He eventually woke up and we decided to bring him back to Canuck Place. It would be the last time Kristian would be home.

In hindsight, the doctors and nurses knew he was dying, but they also knew we were not ready to accept that.  Kristian was not ready to give up. He never lost hope.

The night before he passed away, he took his chemo pill earlier that evening, but struggled with his pain and breathing, and could not get comfortable.  Later that night, the pill fell out of his mouth just before he passed out. He no longer had the strength to swallow the medicine he wanted the most.

When he passed away the next morning, the grief was overwhelming. They allowed us to take our time with him, and when we were ready, they took care him. They even allowed our family and friends to come see him that day to say goodbye. It was well into the night before we found the strength to leave his side. We reluctantly left Canuck Place that night feeling lost, empty and profoundly sad. But this was not the end of our journey with Canuck Place.

I’d like to ask my wife Teresa to come and join me on stage to say a few words.

Thank you and good evening, everyone.

Yes, our journey with Canuck Place is far from over. After Kristian passed away, they continued to take care of us – Emmanuel, myself, Josh, Lukas, Kizzie and even Bailey. They provided us with support for our grief and still continue to do so. We are so grateful for their compassion and kindness, not only for us, but for all the children and families they care for.

We weren’t there long, but the experience was impactful. We’re not sure where we would be as a family if we did not cross paths with Canuck Place. This is an incredible place filled with such amazing people, staff and volunteers, who truly care for all the children and families that walk through their doors.

Because there is joy to be had in life.

3 weeks ago, our world became significantly brighter when our oldest son, Josh, and his wife, Kizzie, gave birth to our very first granddaughter, Emma. We are blessed to have Emma in our lives and grateful for the joy…the love…and the hope she brings to our family.

Thank you for being here tonight to support Canuck Place and all the remarkable work that they do. Help them continue to care for children and families like us.

On behalf of our family, it was privilege to share Kristian’s story with you this evening. 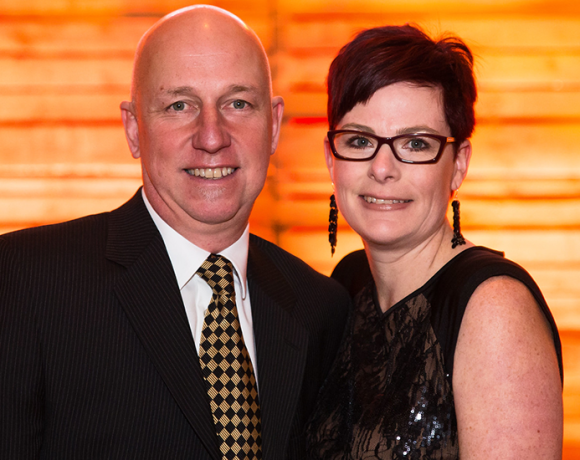 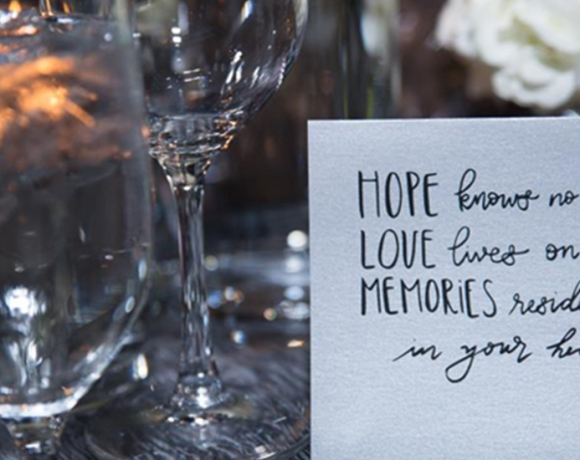